With nearly 6,000 members, Massachusetts Farm Bureau selected 35 “the cream of the crop” according to MFBF President, Edward Davidian. He explained, “These farms present to the public a safe and professional image. They truly show-case the horse industry in Massachusetts for the public.” 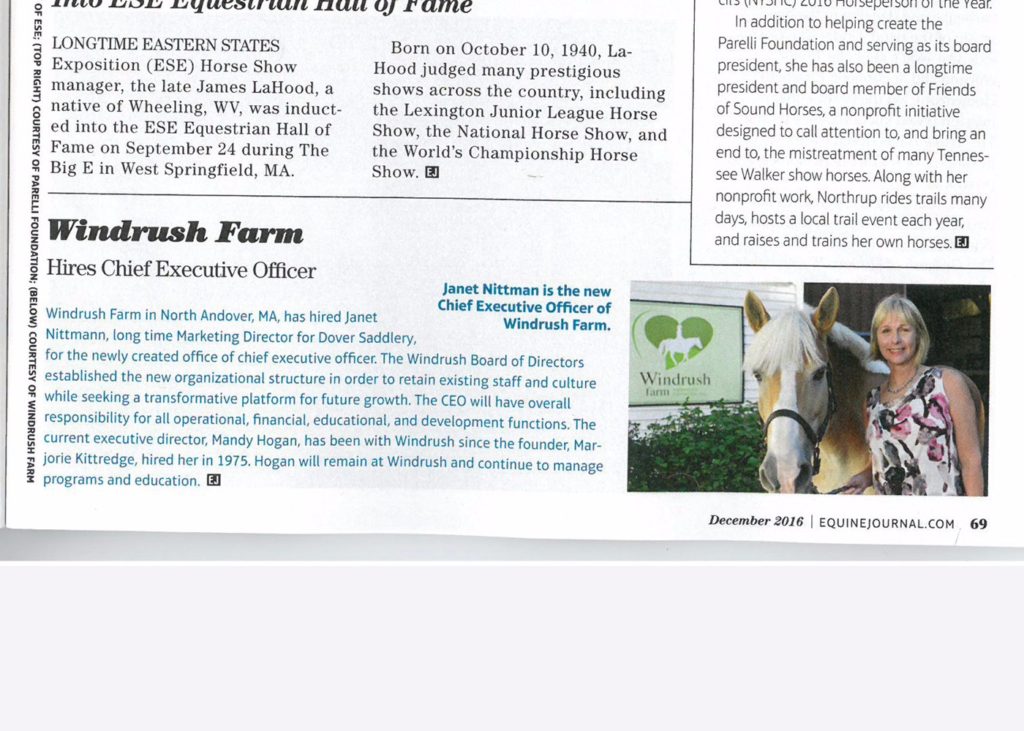 Over the Thanksgiving holiday weekend, 11 members of the Burnstock Riding Club – young equestrians and their horses – collectively hiked and hacked more than 32 miles through Round Top Park, Lockwood Forest and the Bay Circuit Trails for the 10th annual Hack-A-Thon for Hope. Participants received pledges from friends and family for each mile, and together raised over $1,200 to benefit Windrush Farm.

This year, the Burnstock riders rode in honor of Harriet “Bunny” Nutter. Bunny, who recently passed this fall, was an avid supporter of Windrush Farm, located in North Andover. She believed in Windrush’s mission to help enrich the personal, emotional and physical abilities to those they serve by partnering with horses and the environment. Bunny was also the mother of Windrush board member Benjamin Nutter.
“Bunny was an amazing role model to the young equestrians in our community. It’s fitting that we made this year’s ride in her honor,” said Matti Burns, of Boxford.
“Windrush would like to recognize the intrepid members of the Burnstock Club who have, once again, gotten pledges to support our clients with special needs through their annual Burnstock Hack-A-Thon event. What a wonderful group of dedicated young riders. The teamwork and organization in putting this together over two weekends is amazing. They are always willing to ride, regardless of the weather. They are conscientious and caring about their horses and each other. Thank you to all of the Burnstock crew for this amazing effort,” said Amanda Hogan, education and training director at Windrush Farm.
Located in Boxford, the Burnstock Riding Club’s fundraising efforts for Windrush Farm were inspired by former club member Burns, and the club has raised over $30,000 for Windrush Farm since 2006. Burns is a junior at the University of South Carolina, where she competes in the show jumper circuit with her horse, More Cowbell.

The Re Accreditation Clinic #3 “Role Play Wrap UP” was a huge success! Over the weekend, we had over 20 volunteers here at the farm for the clinic. They conducted role plays of different scenarios and situations that occur during classes. The volunteers were involved in various activities to help continue to teach them the best methods to use with clients and horses. We had loads of fun and learned so much from each other.
Stay up to date on our clinics through volunteer@windrushfarm.org 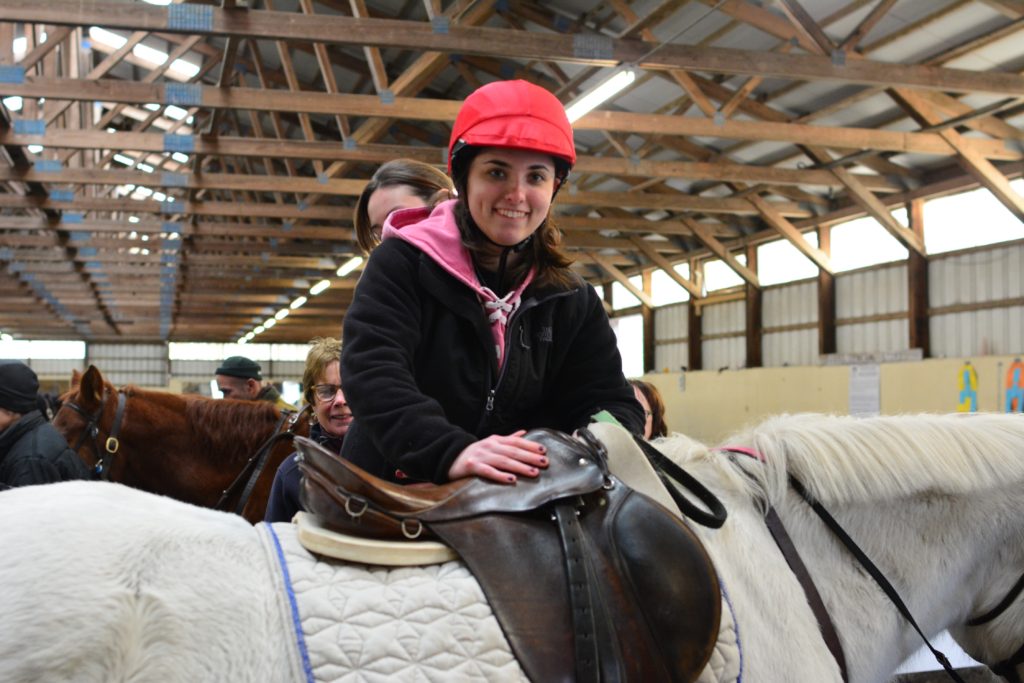 Donate and tell us why you helped shoe a Windrush horse!

Do you want to show your appreciation to your instructor, volunteer or horse?

We ask that during this holiday season, you think of giving a gift that helps a greater cause: the well-being of our horses!

The winter months are right around the corner, and our horses are  in need of winter shoes. This year, to compliment the ever growing Giving Tuesday, we are rolling out the Windrush Farm Giving ShoesDay!  Whether it is on November 29 or sometime in December, your Giving ShoesDay gift will help put a special winter shoe with cleats on our horses. This is the perfect opportunity to give directly to our horses and support our programs.

How does it work?

You make a donation online or via check to the Giving ShoesDay campaign and then share the reason for donating on your social media. (You can also send to us to post for you.) Windrush will be the capturing wonderful photos and stories that include the hashtag #GivingShoesDayWF. We will take the collection of stories and photos shared and display them at Windrush’s Holiday Barn Party on December 14th.

Purchase a winter shoe and make a difference in honor of a loved one. Everyone that donates to the Giving ShoesDay campaign will receive an electronic card that can be printed and presented to their loved one for the holiday.

Please give because you love Windrush!

And don’t forget to share through the hashtag #GivingShoesDayWF

Windrush Farm announces that its 2016 Power of the Horse Gala held at the Boston Marriott Peabody Hotel on Oct. 15 was a great success.

Guests were greeted at the entrance to the hotel by Tucker, one of the star therapy ponies at Windrush. Once inside, the supporters enjoyed cocktail hour while viewing beautiful pictures of the Windrush Farm program and bidding on the enticing silent auction items.

After parading into the dining room to the jazz sounds of the band Eli & The Hot Six, the guests were greeted by board member Lucy Vail, Education & Training Director Mandy Hogan and CEO Janet Nittmann. Dinner was followed by guest speaker Elisa Carreras, who moved the audience with her story of what Windrush Farm has meant to all three of her children. Carreras then introduced the video “The Healing Power of the Horse.”

The evening program continued with “Pony Up” hosted by the entertaining Tim Vaill and Ben Nutter, during which the audience pledged over $135,000 to support Windrush. To conclude, the evening guests enjoyed a little swing on the dance floor to the energetic jazz ensemble.

“The annual gala is a wonderful opportunity to celebrate the outstanding recent accomplishments of Windrush and to look forward to the future,” said Janet Nittmann, CEO of Windrush Farm. “Thanks to its incredible community of supporters, Windrush can continue to change lives and be a leader in its field.” 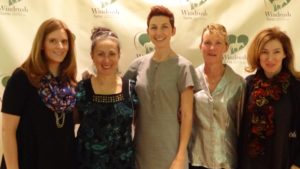 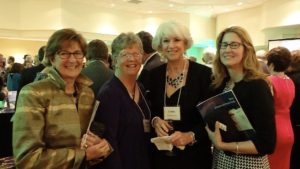 Windrush Farm is a nonprofit organization that expands and enriches the personal, emotional and physical abilities of all those served by partnering with horses and the environment. Clientele include children and adults with special needs, veterans, youth at risk, bereavement groups, survivors of human trafficking and more. Each year, Windrush provides an array of educational services and therapeutic activities to more than 2,050 children and adults and their families.

Founded in 1964, Windrush Farm was one of the first programs to provide equine assisted activities and therapies in the US.

This weekend was the American Connemara Pony Society Region 150th Anniversary show and celebration at GMHA in South Woodstock, VT.

Our Board Member Debbie Shade competes every year. This year, she invited us to bring some of our Connemara’s to show and promote their usefulness for our therapeutic riding programs. Debbie along with our pony CRICKET’S former owner Sally Oxnard, helped us defray costs and join in the fun while promoting Windrush Farm.

Cricket (a.k.a Paradox Cricket O”Carolan), and Evan (a.k.a. South Ridge Aoibhinn), both registered Connemara’s, went up to VT with Josselyn and Coleen Shaughnessy and showed in in-hand classes, as well as under saddle. Both horses were excellent and came home with ribbons!

Thank you to Debbie, Sally and all the new friends we met that are helping to spread the word that Windrush is in need of horses and Connemara’s are perfectly suited to this job!

North Andover/Boxford, MA: Windrush Farm successfully hosted their first 5k Trot Trot Trail Race on June 16th, cheering on nearly 140 runners. Windrush added the exciting run to their annual friend-raiser, Bring A Friend Night, in order to bring even more new faces to the farm. In doing so, Windrush had over 300 individuals and their families celebrating that evening.

“It was a joy to not only welcome so many people to Windrush, but to have the opportunity to showcase our incredible trails and programming to the greater community. We hope everyone had a lot of fun and learned a little bit more about who Windrush is and what we have to offer,” said Jen Wassan, Windrush Farm Development Director.

The Trot Trot Trail Race was part of the North Shore Trail Series, taking place on the beautiful trails surrounding Windrush Farm. The 5K had an old time New England feel, with lots of twist and turns. The trail lead runners through some of the property’s hidden gems, such as the cabin in the woods, vernal pools, majestic birds and open pastures. The finish line ended into the Bring A Friend Night extravaganza where runners were able to partake in the food truck dinner and open beer and wine bar.

Those that were not running enjoyed the ambience of Bill Perry and his Fiddling Friends, while experiencing class demos and tours of the farm. People thoroughly enjoyed their dinner and dessert from the food trucks Happy Taco, Augusta’s Chicken on the Road Truck and The Whoopie Wagon as they waited to applaud the runners at the finish line. Overall, the night was a souring success and Windrush Farm looks forward to hosting it again next Jun 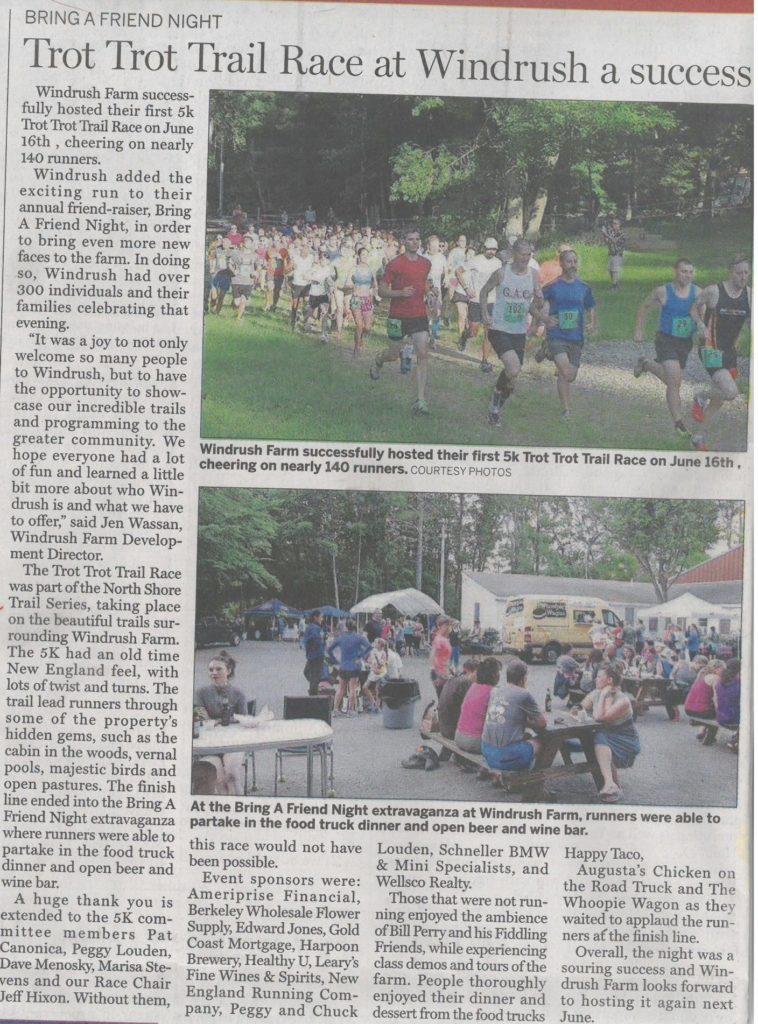 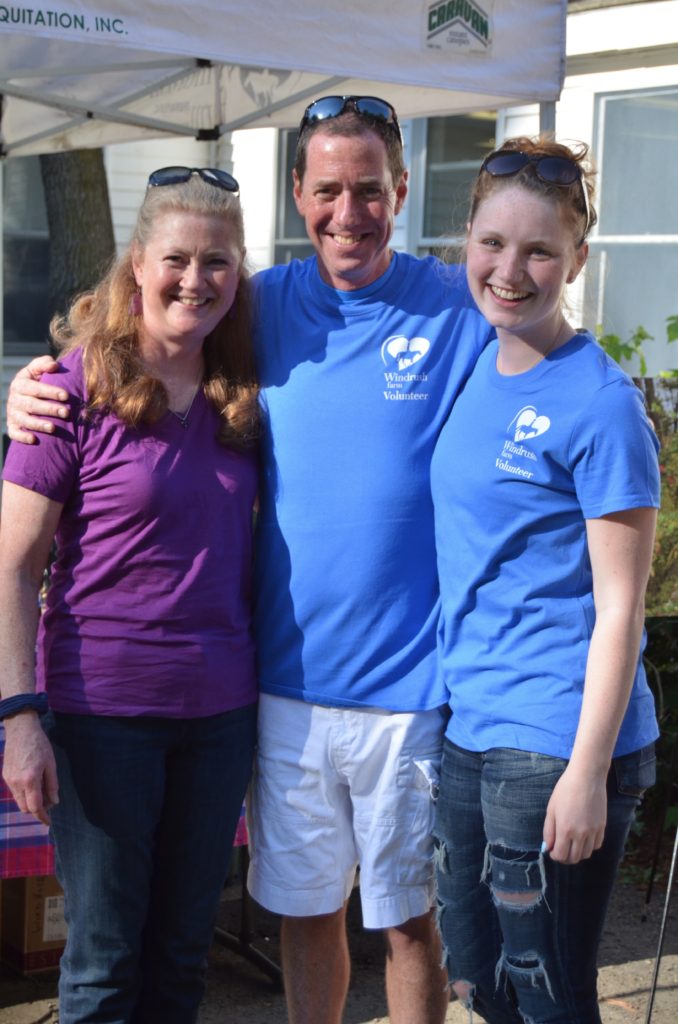 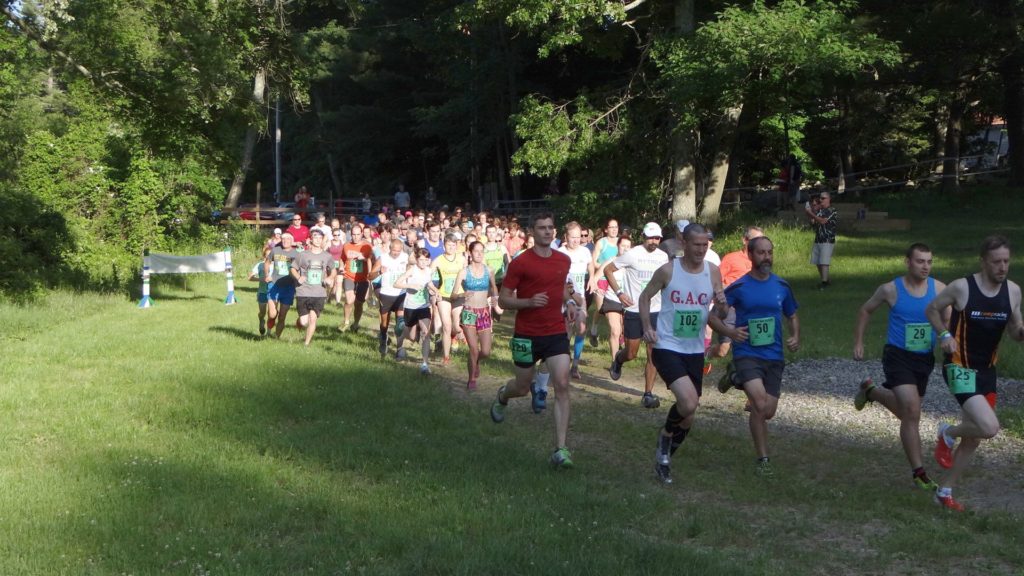 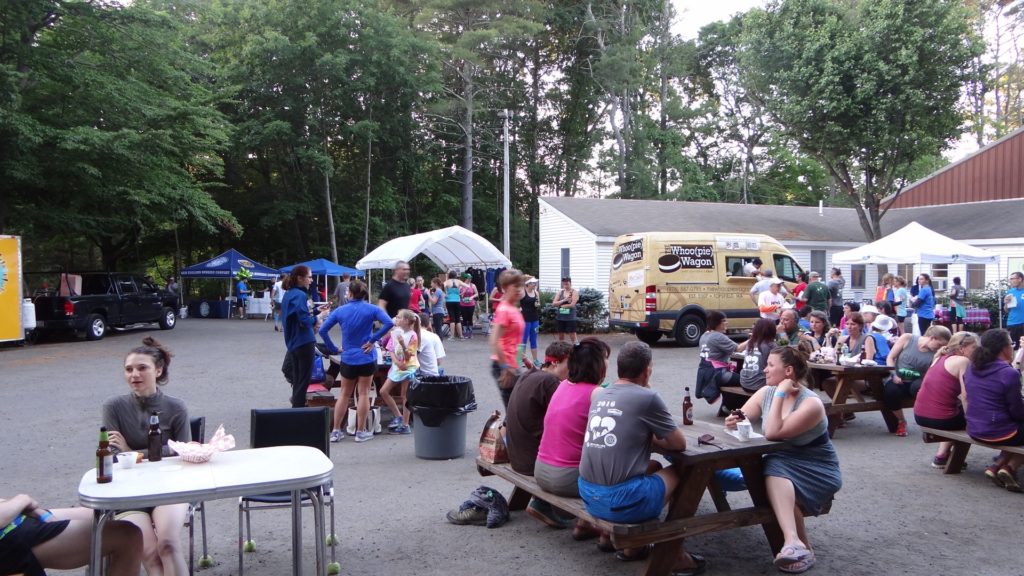 Deloitte does it again! Deloitte visited the farm on June 10th with 25 employees for their Service Day. They took the time to power wash around the property, did major clean up and mulched. The amount of work they completed has allowed us to enter into the summer with ease. Deloitte has been coming to Windrush for their Service Day for many years. Every visit, they continue to amaze us with their positive attitudes and hard work. We are incredibly grateful and honored to be a part of this company’s community service efforts. THANK YOU! 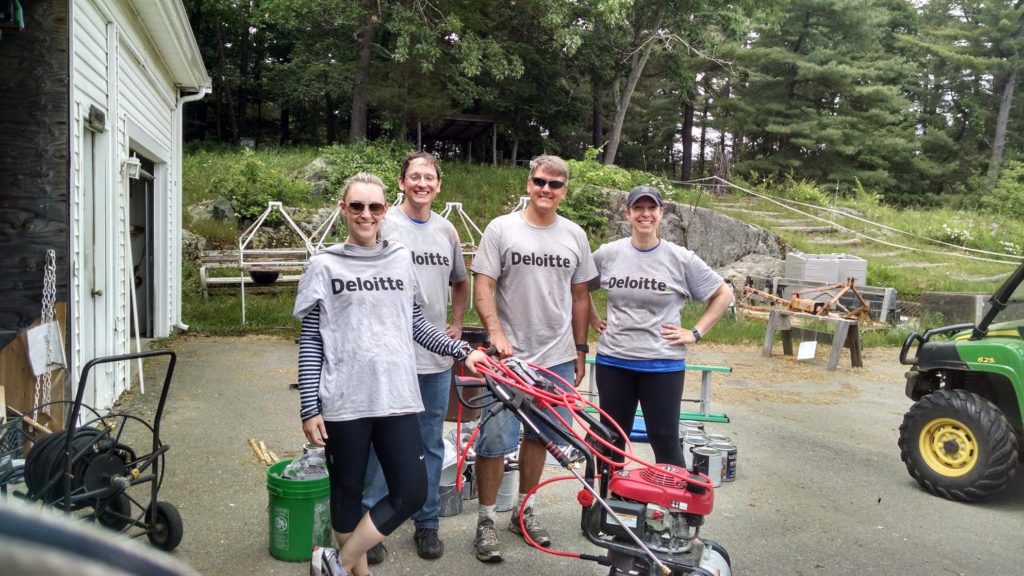 We use cookies to ensure that we give you the best experience on our website. If you continue to use this site we will assume that you are happy with it.Ok!